Meet Cait Ashwood: A Q&A with the author of The Seekers

Author Brent A. Harris is a regular around these parts - and this time he's taking on the role of quizmaster, as he sits down with Cait Ashwood for a chat about her book The Seekers - and more. 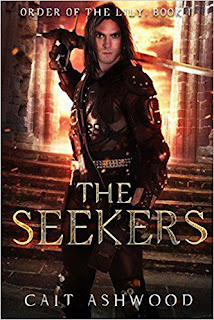 Cait Ashwood has had a goal to publish a novel for as long as I’ve known her. This January, she met that goal with the release of The Seekers (Order of the Lily, Book 1). Let’s both congratulate Cait on her amazing achievement and at the same time, learn a bit about her. Cait, congratulations! How do you feel?

Well, Brent, I’ve been working on The Seekers for a really long time. I think the first draft took me over two years. I joined some crit groups, started devouring some books on the craft, and decided that writing was something I was going to be really serious about. I re-wrote the entire book in under three months, all 131,000 words of it. Editing, formatting, and everything else was a whirlwind, but I got it all done under deadline. Release day came and I had an in-person party for family and friends. I have the best friends in the world – they handled just about everything. They chauffeured me around all day and help set things up, so I had the best release party ever. Sometimes I walk in my writing room and see my book on its little easel and still have that moment of, “I wrote that!” It’s awe inspiring. Reviews have been incredibly positive as well, so it’s really validating and heart-warming. There’s nothing like writing down the stories in your head and having people like them to boost the ego.

I bet! Now, as I know you from writing circles, I know your real name (cue maniacal laughter). Care to tell us what’s with the non de plume of Cait Ashwood?


In all honesty, my real last name matches that of a popular TV show character. I’m always being asked if I’m related to said character, with much nudging and winking. Seeing as I don’t write in that kind of setting, I felt it might harm the representation of my work. I love nature as a theme, hence ‘Ashwood’, and I spent a number of years working in a Celtic store, so I went that way when choosing the spelling for the first name.

Oh, I see! That makes sense then. Well, what do you like to do when not writing? Tell us about yourself!

When I’m not writing? What is this mysterious free time you speak of?

Joking aside, I love playing RPGs. I’m currently bouncing between Dragon Age Inquisition, Skyrim, and FFXV, depending on my mood. I’ve already beaten them all, but sometimes you just want to sulk around in a cave and shoot things with arrows. I also play violin, and have a few students I teach on the weekends. Crocheting cute stuffed animals called Amigurumis is also something I do for fun and charity.

I too used to be an adventurer until I took an arrow to the knee! What a coincidence. Much like your penname, The Seekers also recently underwent a complete transformation of sorts. It’s got a shiny new cover. What was your thought process behind the change?

The original cover was artsy and beautiful and had a coin with a wolf on it that really comes into play with the plot, including the claw marks over it. The problems? For one, very few people could tell it was a coin. Secondly, because of the boatloads of shifter romances out there, the book was getting mis-categorized. Wolf + sexy man = shifter romance! Thirdly, if I held the book up in front of a bunch of readers and asked them what it was about, I got a lot of “Ummmmms”, which, from a marketing standpoint, isn’t really a good thing.

The model on the new cover isn’t my favorite, but the design change has solved the “Ummm” issue unequivocally, and I haven’t heard ‘shifter romance’ as a genre since the switch, thank heavens. People can now tell at a glance, and with little thought, what they’re getting into with the series. As this is my debut novel, I’m about ready to stamp, “Live and Learn,” on my forehead, and not let anything get to me too badly.

Hey, we all have those moments. Plus, it makes my first edition cover worth more, right? Right?! Okay, so let’s switch gears here and dive into the world you’ve crafted. Who are the Seekers and what are they seeking? What’s your book about?

The Seekers are the male children born of a bloodline of female healers called the Order of the Leaf. While the ability to heal the planet is limited to the women, the Seekers aren’t without abilities of their own. They’ve developed a sight that allows them to see a woman’s compatibility with the earth, and judge how strong of a healer she may become. They can also phase, or jump between locations simultaneously.

With the disappearance of the Order sixty years ago, humanity was thrown into a panic. Without the Order, the fields produced less and less each year, and starvation was imminent. That is when one Seeker, nicknamed Dopey, found out that he could not only jump between locations, but also through time. Thus began the hunt. Seekers travel into the past to find women that would become ancestors of the Order, with the goal of bringing them back into their current time. The only issue here is that the women who go through the time change are rendered sterile. Thus, while they do have some healing ability, they can never re-establish the line. The Seekers are stuck in a pattern of catch-and-release, and there’s no end in sight for them at the beginning of the book.

What was your inspiration for writing, The Seekers?

I have this habit when I can’t get to sleep of giving myself a scenario to sort of mentally roleplay and seeing where I can run with it. Sometimes, they only last a night or two before they fizzle out. Audrey’s story lasted years, and it had just never occurred to me to write it down. It went through numerous changes, and I found neat ways to explain things, and before I knew it, I had a hell of a lot more than Audrey running around in my head. I had this entire world with intrigue and all of these complexities; it was really a delight.

Tell us about your main character, Audrey. Why do we like her so darn much?

I have a feeling this answer is going to vary greatly depending on the person reading her. With Audrey, while she’s a heroine, she’s not afraid to show her more vulnerable side. She gets overwhelmed, she gets panic attacks, and she finds herself in situations where she has no idea what she needs to do, or how to do it. In essence, she’s human.

Writing her character arc was a lot of fun. She tried playing by their rules, and it got her in some pretty unsavory situations. After that turning point, she decided she was in control of her own destiny, rules be damned. She has the clout to set up the kind of life her and her kind will be living from this point onward, and she wants to make sure it’s going to be a good one. It was very satisfying to write.

Which character was more fun to write, Audrey or Hound?

This varies scene-for-scene. I will say that, in book 2, Hound takes the cake. Book one is much more focused on Audrey, so she has the larger number of scenes. I suppose, as a woman writing a male character, Hound was by default more ‘fun’ for me, because it was like getting in an alien’s head. Not that men are aliens. But…they’re new, and I like shiny new things, especially if they pose a challenge.

I’m an NOT an alien. I promise. So, I have to ask for readers who might want to know: Is this a kissing book?

I love you so much right now for throwing in the Princess Bride reference. The Seekers is not a kissing book; anything interesting that may or may not happen is a fade-to-black. That will not continue as the series goes on, however, but all scenes are necessary for plot-related reasons and are certainly not explicit. There’s not going to be kissing for the sake of kissing. Just…stay out of my hidden files where I’ve written all the fun scenes that will never make it to the book, okay?

*Peeks into hidden files* *Blushes* What’s in store for our characters? What comes next?

I’m going to answer this as best as I can without throwing out spoilers. The Seekers was very much focused on Audrey, her abilities, and her struggle to survive and be recognized as what she is. Order of the Lily, the next book, has a much broader scope as we see what role the Order has to play in the wider world around them. As such, you get to see chapters from many different character’s points of view. People that were minor characters in The Seekers have a much larger role to play now. Deuce and Gwyn each have a few chapters, and even Zeche has a chapter or two throughout the book.

Thank you, Cait! It sounds quite intriguing and I can’t wait for the next chapter! But before you go, one question I learned to ask from a good friend; what books are currently on your nightstand? What’s been your favorite book of the last year?

I’m one of those awful ebook readers, primarily because my wallet screams anytime I go within ten miles of a Barnes and Noble. It’s that bad. Currently, I’m making my way through the Ink Mage series by Victor Gischler. My reading did get put on hold when my friend released her new book, as I’m a rabid fan of her series. I think I may re-read that again just for the heck of it. She writes dark fantasy/paranormal-not-exactly-romance with no partner gender preference, so if that’s something anyone sounds interested in, look up the Beautiful Monsters series by Jex Lane.

Will do! That wraps it up for chat with Cait. I hope it’s made you excited to read her book, The Seekers that I’ve conveniently left a link right here for you to go read: https://www.amazon.com/Seekers-Order-Lily-1/dp/1541005848. And while you’re at it, check out Cait’s website too, right here: www.caitashwood.com.