BOOK REVIEWS: The Ammolite Adventures: Redstone, by C.E.Johnson; Holly and Ivy, a Starklight Steampunk anthology; and First Time Out: The Second in the Crew Chronicles, by CH Clepitt 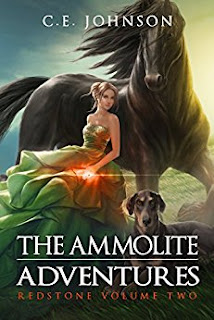 In the same vein as one never judging a book by its cover, I might suggest a new rule for readers coming new to this book - never judge a sequel by its first chapter.
I hadn't read the first book of this series but had been provided a free copy to read, so as ever on reading I plunged into a review. The first chapter might be a little off-putting for many readers, though, as it has quite the infodump bringing those who haven't read book one up to speed. Readers of book one can safely leaf past a chunk of this, but the action gets underway partway through the chapter, so don't skip it completely. A "Previously" chapter might have done the job better here for newcomers.
The story picks up the saga of Emma Whayne, a 14-year-old girl who has found herself propelled into the world of Acacia, a magical realm, along with her pet Doberman Xena (who she refers to as Z, slightly confusingly to those who pronounce that letter Zed rather than Zee).
A year in Acacia is equivalent to a day on Earth, so Emma's adventure - including dragons and pirate ships, schools of magic and evil conjurers - zips along, with months passing and her absence hardly noticed back on Earth.
It's an epic adventure - albeit one I was never quite sure where it was going. The motivations of those opposing Emma never seemed entirely clear, nor indeed her own, while she seemed to possess talents far beyond your average 14-year-old, becoming a teacher of tai chi, for example.
We are too often told what is happening rather than getting to experience it for ourselves, alas, such as when we are told of one character that "he spoke with conviction and Emily could tell he missed his homeland", when in truth he's hardly said anything about his homeland, and we could have done with learning that for ourselves.
That, and a fair bit of character hopping to characters who sometimes barely feature in the book otherwise, tends to get in the way a little of the story, which otherwise would be a fine tale for young teenagers of adventure in an exotic, faraway, magical land.
Emma makes for a strong role model for such readers, confident and assured in a world she barely knows, and able to rise to the top through focus and dedication.
The book ends looking ripe for a sequel - so I'm sure there will be a return to the adventures of Emma Whayne and the land of Acacia. 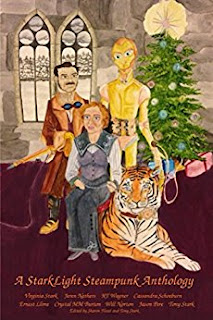 The crew over at Starklight Press have produced a vast array of books by now - and so I dipped into their back catalogue for this one, a steampunk-themed collection centred around Christmas.
There's a great deal of fun in this one - the likes of Virginia Carraway Stark's tale Prospects or KT Wagner's Miss Violet's Northern Lights Show spin the gears nicely - but there's one astonishing story in here that has to be mentioned.
Will Norton's tale The Tree is a story that deals with spousal rape, abuse and all from the point of view of the perpetrator rather than the victim.
It's a bold tale - and reminded me of the bravery of the band The Men They Couldn't Hang in their song Father's Wrong singing about child abuse. It will without a shadow of a doubt alienate many readers, but that doesn't mean of course that it isn't a tale worth telling - it shocks, it tries to show what that other person could be thinking, and it doesn't shy away from the most difficult of subjects. It left me feeling uneasy, and a story that stops you in your tracks in such a way is absolutely why I love reading short stories by new writers. There's always the possibility of someone suddenly putting a subject in front of you that had been there all along but which you had been quietly avoiding thinking about - and this story, and this collection certainly does that.

Holly and Ivy: A Starklight Steampunk anthology is available here. 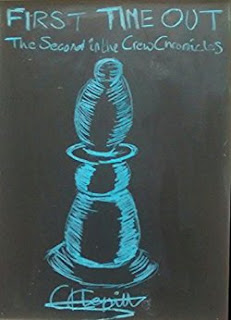 First Time Out: The Second in the Crew Chronicles, by CH Clepitt

I reviewed Pilot, the first in the Crew Chronicles recently, and it was a good deal of fun.
Think Firefly with fairies and you've got the idea - a spaceship making its way from job to job, but fairies are real and one of them is a member of the crew.
First Time Out takes the idea and runs with it - if fairies are real, then fairy dust is real, and humans inevitably look to find ways to exploit its powers. Enter dust dealers, the lowest of the low.
What does that mean for our crew? Trouble.
This is a short but sweet addition to the series, which looks like it's shaping up to be a fun, episodic collection. This book feels very much like the second episode of a TV series, with character elements sliding into place for future development.
I look forward to episode three!

First Time Out is available here.
Posted by Leo McBride at 10:10