A slight oddity this time around with our book review - a double review of the same book. Both Brent A Harris and Leo McBride review The Machine, by E C Jarvis. First up, Brent's review... 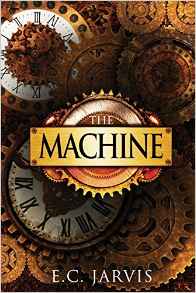 E.C. Jarvis’ book, The Machine, is not something I think I would have picked up off the proverbial kindle shelf myself. Steampunk? Torture? Erotic beats? It’s not my typical genre, and I must confess that I had to be more objective at the beginning of the book and start it entirely from a critical, analytical point of view. I was determined to read it, after all, what good is a writer if they can’t steer outside their wheelhouse?
Then, something odd happened. As I dived in, I found myself drawn in to the world and characters Jarvis created. This book was expertly crafted, the world-building was perfect, the characters all diverse and with different voice, the storyline streamlined and the pages easy to turn.
Once I overcame my own reticence over the first few chapters, I became a fan. I loved Jarvis’ writing style and narrative voice. Objectively, even parts I particularly didn’t care for, (i.e. sex scenes and torture) were well-written and heightened the realism and sense of the world.
I’d highly recommend this book to lovers of the genre, and may even be persuaded, with some gentle arm-twisting, to keep going further into the series. Five stars, and proof that Independent Authors can produce something high-quality and engaging outside the Big 5.


This book was provided to me for free in exchange for an honest review.

And now, Leo McBride's take on the novel.

Let me say from the outset that this book is best enjoyed with a liberal helping of rum. Be tipsy enough to giggle and you'll be all well and good.
This is a steampunk tale filled with lashings of sex, torture and swearing. Steamypunk, perhaps. But golly, if it doesn't get off to matters at quite the pace.
Our erstwhile heroine, Larissa, is practically ripping off her blouse and throwing herself at her would-be beau, The Professor, before we've reached the end of chapter two. Frankly, I had more anticipation and build-up waiting for my foot-long Italian. Perhaps I should clarify that I read the first chapters of this waiting for my sandwich in Subway. Did I mention rum? Rum and liberal usage of the adjective phwoar are what you need here.
Anyhow, there she is, shuffling her shirt, then before you know it, the next chapter has an explosion leaving her corset in tatters, then scant moments later she's tucking something into her bra. I'm not entirely sure all this is consistent in terms of continuity but what I'm trying to say is I'm just an Irish Catholic boy and all this talk of women's undergarments has me shifting into a bright shade of uncomfortable. Rum, phwoar and keep a fan on hand to waft oneself while reading.
So, to recap, Larissa is a humble clerk, but one with a destiny. She is in possession of a rare element, Anthonium, which The Professor needs to power his wondrous machine. That's just fine with Larissa, as The Professor is powering her imagination with the things she'd like to... ahem, anyway, things don't go quite according to plan and before you know it, Larissa is the one needing to come to the rescue of The Professor (sure he's got a name we discover later of Max Watts, yes Max Watts, a powerful name indeed, but the very definite article before his title seems to suit much better).
Aided by The Professor's faithful engineer Cid (surely a nod to Final Fantasy), and the hunky and mysterious Holt, who may either kill her or bed her along the way, Larissa takes charge of The Professor's dirigible and off they soar. Her cat, Imago, may or may not be the grand hero of the piece too, and is certainly the character most likely to enjoy ear rubs and chasing mice.
There's also a fair bit of swooning - I'm not entirely sure this isn't the fault of the corsets but oh good lord, you've got me talking about the undergarments again and isn't it warm in here?
Imagine, if you will, that RKO made a steampunk serial brimful of airships, goggles, and wish fulfillment, but with lashings of HBO-style sauciness and nudity, and lo, behold, we have The Machine.
By the end, Larissa is a much-changed young lady, and the world had better watch out. Frankly, I want a spin-off with the whole thing from Imago's perspective. I'll drink to that.