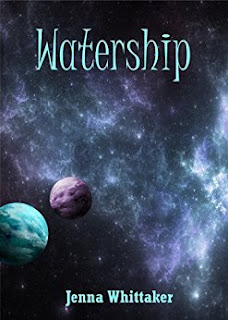 A few years ago, I read one of the most extraordinary science fiction novels I've ever picked up - This Is The Way The World Ends, by James Morrow. It was an end of the world tale in which the surviving humans of a nuclear holocaust are put on trial by the spirits of those who never had a chance to live because of the armageddon. It was a rich, vibrant tale, whose execution didn't always live up to the marvellous ideas within.
I'm reminded of the work as I read Watership because again, here is a book that is filled with smashing ideas.
The Watership of the title is a colony ship, bursting free from the world it was hidden under, while its insect-like inhabitants cultivated the DNA of the humans in the surrounding area to suit their needs when it came time to harvest them and carry them to the new world that would be the sanctuary for both races.
Things unwind, however, first when the leadership of the Crawler, Desu, is challenged by a captive human, Iyarid, after he discovers she has smuggled a non-approved child onto the ship in addition to those chosen for removal. He lashes out recklessly in his decisions, endangering his own people as much as anything else, but worse is to come as the living ship comes under the control of the powerful Charn, an aeromancer, and things take a bloody and sinister turn.
Along the way, we take in other scenes of humans becoming voluntary slaves to the entertainment system that is supposed to fill only their leisure time, and encounter the living beings created within the ship but who may have to be sacrificed to achieve its ultimate goal.
This whirlpool of ideas certainly sucks you in, though at times the background is a little too hazy. As the ship blasted off from the planet, I had lots of questions remaining about the world and the society it roared away from - was this our world, what level of technology did this society have? The ship itself felt like it lacked definition - I wanted more detail so I could see it more clearly in my mind, a solid ground from which the ideas could soar.
In the end, I find it hard to rate the book exactly. The hazy details leave the book a little shy of a four-star rating, but the ideas are stronger than a three-star one. In the end, I'm going to favour the ideas.

Watership is available on Amazon here.
Posted by Leo McBride at 20:34