Guest blogger Brent Harris gets into double trouble as he stops by to review two tomes of alternate history. The first, Blackbeard’s Daughter, is a secret history of the life of Edward Teach which promises that it’s not ‘a kissing book'. The second, by alt-historian Mark Gillespie, showcases a fictional world that’s scarily prescient. 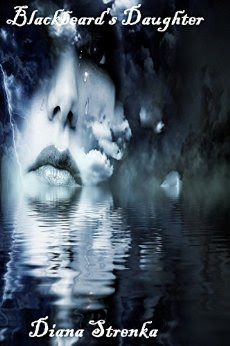 Blackbeard’s Daughter is a ‘secret history’ of Edward Teach’s fictional daughter, Margaret. While Teach would later become the fearsome and infamous pirate, Blackbeard, Diana Strenka’s debut novel focuses on the emotional trials of Margaret and what she must endure as her father is mostly absent throughout her childhood, and tragedy befalls her in every chapter, in a story that would make G.R.R. Martin shed a tragic tear or two.

Blackbeard’s time as Edward Teach is mostly a mystery, and Diana dances around factual events well enough that it is plausible that some of this story could have really happened. But, there are some incongruences with the historical record that requires the reader to develop a small suspension of disbelief. Still, accepting that the narrator is unreliable and biased towards her father helps the reader accept this differing account.

But Margaret is a naïve, entrapped young child, with only the basics of an education. This makes for very short, stilted sentences with no real descriptions or deep insights about herself or her world.

What is left can make for a story that is hard to get into style-wise but for the tragedy which happens at every turn of the page. And that is where the book shines best: Margaret finding inner strength through these terrible events and transforming from victim to anti-hero, and why I can’t help but give the book 3.5 Dread Pirates, rounded to 4. If anything, we need a book about Pirate Margaret raining vengeance on the British.

L-2011 is an alternate history story of what might have happened had the real-life death of Mark Duggan led to long-term rioting of downtown London. What interested me in this book was that the deaths of black youths by police officers have triggered such rioting here in the States, so it was a vivid reminder that Mark’s dystopian aftermath of the incident in London, resulting in a long-term and large-scale loss of control of a major city, is a very real possibility.

We see the aftermath through the eyes of Mack Walker, a teenager with a secret in his past. He befriends several local London kids, whose backgrounds are not so fortunate as Mack’s white, upper middle-class upbringing. They all have their own issues to deal with, and there is a nice interplay between characters that matches what you’d read from a NY Times Bestseller. However, my one big criticism of the book was that the characters don’t have traditional arcs. They all have strong personalities that are reinforced as the story progresses, but they don’t undergo any transformative process. And maybe that is the point. These kids are all reflective of a growing generation plugged into social media—they see the world like no generation has before, but there’s a powerlessness there as they see the corruption and media sensationalism, but are unable to affect change except through violence.

Therefore, it makes sense that the chaos from the riots also spills over into social media, as Twitter, Facebook, and Messenger, vlogs and blogs, become a battleground in which virtual celebrities are created—each with their own opposing agenda. I thought this was an interesting twist that would most likely happen, as we see how social media platforms have given voice to social injustice, and have been used effectively to organize individuals in the wake of devastation. The transition to normal narrative to social media posts can be a bit jarring at first, but I feel it serves the message of the story.

What’s lost during the events of these riots and the social media sensationalism, is the reason the riots began in the first place—the unjust death of a black youth by police actions. And because that’s exactly what would—excuse me—has happened in real life, makes Mark’s book a scary, thought-provoking work of alternate history that might one day happen in our world. 4.5 stars rounded up to 5

Brent Harris is an author of alternate history, sci-fi and fantasy and occasionally doesn’t hate every book he reads, although he’s sure there’s a universe where he is far, far kinder. You can connect with him at https://twitter.com/brentaharris1
Posted by Leo McBride at 14:17