BOOK REVIEW: Rarity From The Hollow, by Robert Eggleton 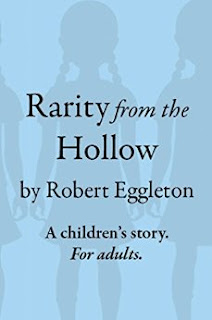 Rarity From The Hollow, by Robert Eggleton

Lacy Dawn is an unusual girl, caught up in circumstances that are sadly all too common. Her family lives in poverty, her father is a PTSD-addled veteran turned abusive husband and parent. Her mother struggles to make the best of a bad situation, though is frequently raped by her husband and blames it on herself. And Lacy's best friend comes to talk to her regularly, despite having been killed by her own sexually abusive father some time before. Life is not easy for Lacy as she waits to burst into her teenage years.

Between talking to her friend's ghost and having conversations with the trees around her home, it's hard to know exactly what is real and what is simply the rich fantasy life of Lacy, and when we meet Dotcom, a semi-organic robot that she treats as a proxy boyfriend, we are left to wonder for some time if he truly exists or if he is part of the tapestry of tall stories that she conjures up to distract herself from the squalor and despair of her everyday world.

And then Dotcom reveals that Lacy has a mission. She has to save the universe.

Robert Eggleton has created a child's story that is most assuredly not written for an audience of children. Alongside Lacy's discovery of her supposed role in the fate of the universe, the story explores the gritty awfulness of life in poverty while at the same time examining her first footsteps into discovering her sexuality. There are passages that are a tough read, with Lacy talking about her panties and erections - tricky when this is a girl who starts out aged 11 in the book and follows her as she tiptoes towards teenagehood. But these sections don't come across as exploitative, rather they seem a genuine and honest look at the kind of conversations children start to have at that age, the questions they ask, the situations they consider. Life does not always spare children the innocence we might wish them to have, and this is a story set in situations where children have to confront such topics early - and weigh the effects they may have on their lives on a daily basis.

By comparison, the passages that explore Lacy's role in saving the universe are at the opposite extreme. Where her real life is gritty and real, her exploration of Dotcom's world of Shptiludrp are almost surreal in nature. Meanwhile, his interference in her life, and that of her family, still leaves you wondering how much is real, and how much is in her head.

There's much that will linger in the head after reading this book - it is indeed a rarity to see a story written with such candour about one so young. The science fiction elements don't hold together so strongly as the sections that deal with her home life, but they hold out the possibility of hope, a way out of the depressing normality that plagues Lacy's life. Will she save the universe? Perhaps. I know that as I was reading, all I fervently hoped was that she would be able to save herself.

Rarity From The Hollow is available on Amazon here.
Posted by Leo McBride at 06:54