BOOK REVIEW: The Stratosphere - The Birth of Nostradamus, by Brian Cox 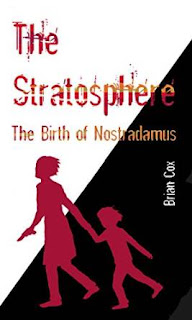 SOME reviews are easier to write than others. This is not one of the easy ones to write - but why is it so hard? Because there is so much promise ready to burst out of this book. Let me start with, what I readily admit, is an imperfect analogy.

Years ago, I used to play the Magic: The Gathering card game. And I was rubbish. I used to build great big towering decks of cards stuffed full with cards that I just found interesting. Every time, I got beaten all ends up by sleek, trimmed-down decks that were designed to do exactly what they needed to do. I was just too attached to the host of different things in my deck to make it what it needed to be to be successful. There's something of that in the way that Brian Cox has created this book.

The future he envisions is a horrible, but brilliantly realised, one. The consumption of resources by 3D printers has left the future world ragged and scraping to get by. The day-to-day life of people is so spartan and unhappy that the majority of them escape to the virtual world of the Stratosphere whenever they can - a place where the body suits they wear in the real world allows them to experience the full range of sensation, almost as if the whole thing is real. But it is a place without imagination, it is a place where talent is fake and success is but a comfort blanket to make up for the paucity of genuine substance inside the Strat.

This contrast between the real world and the virtual one is striking - with Strat users taking to the system as an escape, and acting like addicts needing a fix when they can't get online. Real world problems are neglected, few people are looking for a solution, and communities survive by scavenging or trading for the print they need, while the military complex uses the remaining print machines to spit out helicopters to send into battle.

As a world, it's a fascinating one, and the characters that Cox creates, from Nancy, a square peg in the round hole of this world who discovers she is the key to unlocking its future to the crippled Gus, who puts the right thing and his love for others above his own health, are compelling, and struggling with the flaws that make them who they are. Tragedy hangs heavy in the air over these characters, as bad decisions spiral into the worst of consequences.

In all of that, the novel is a success - so where does it stack its own deck against itself? Well, we learn a bit too much about too many characters. There are characters that come and go within the novel that we dive into the heads of to discover their motivations, their ambitions and aspirations - and yet we barely see some of these characters again. It takes quite a while to figure out who the lead characters of the book are as a result, and even then, the focus remains a little confused. It needs slimming down, streamlining to become more effective.

The hardest part though is the opening, which is a very lengthy piece of exposition, couched as a lecture by the professor trying to find a resolution to the world's problems. He tells the audience - and by extension the reader - the history of the world, and it feels very much a chore to get through. If you get through that, the rest of the book is a page-turner, but I imagine more than a few readers won't reach that part.

And so a hard review to give - because the world is fascinating, but the structure just doesn't quite let it shine. For the world alone, I would give the book five stars, but overall I have to settle for giving it three. I look forward to more from Brian Cox, though, brilliant ideas are always worth following.