Author Laurence O'Bryan publishes his latest book - The Nuremberg Puzzle - today. He visits the blog for a discussion about his latest work, his writing - and the shocking link between the Catholic Church and Adolf Hitler that he discovered during his research. 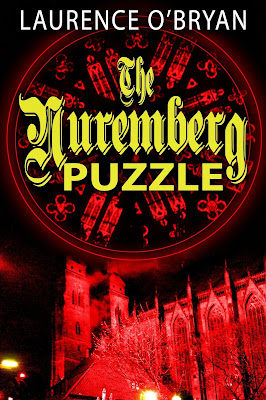 I wrote The Nuremberg Puzzle, a contemporary mystery, because of what I discovered about the Vatican’s support for Adolf Hitler. What I learned shocked me, deeply.

The Nuremberg Puzzle is about the modern day hunt for the letters that the Pope at the time, Pope Pius XII, wrote to Adolf Hitler. His copies of these letters were destroyed by his personal secretary when he died in 1958, without ever having faced a judgement for the crucial support he gave to the Nazi regime.

The story sees Sean Ryan travelling to Nuremberg, as German fascists plan to rid Europe of refugees comes to a genocidal head. This post will give you some historical background into why I had to write this book.

The historical puzzle, which bothered me for a long time, about the genocide that Adolf Hitler and his henchmen perpetrated on millions, is why did the German people go along with his murderous madness?

Anti-Semitic propaganda was one of the main ways the Nazis turned the German people into killing machines. But I always wondered where he got these ideas from.

Here’s some examples of what appears clear to me, that Catholic Anti-Semitic propaganda in the previous decades, was the source of these evil ideas.

This is the environment that Adolf Hitler was born into, as a Catholic, in a militaristic Catholic country, Austria, in 1889.

To give you an idea of Austrian culture at the time, consider Ernst Schneider, a politician with the Austrian Christian Social party, which had received the support of Pope Leo XIII, who proposed in 1899 that “the Austrian government should offer a cash prize to any good Christian who killed a Jew.” (The Popes Against The Jews, D Kertzer, pp 202.)

The following quotes give further substance to my suggestions above about where Hitler got his ideas, in his own words:

“Not until my fourteenth or fifteenth year did I begin to come across the word ‘Jew,’ with any frequency, partly in connection with political discussions….
… from time to time I read arguments which gave me some food for thought. At all events, these occasions slowly made me acquainted with the movement, which in those days guided Vienna’s destinies, the Christian Social Party…
My views with regard to anti-Semitism thus succumbed to the passage of time, and this was my greatest transformation of all…
. . .the personification of the devil as the symbol of all evil assumes the living shape of the Jew. ”  – Adolf Hitler (Mein Kampf)

It’s one thing for some warped maniac to concoct ideas about racial superiority, we still have such idiots, but it’s another for him to persuade millions that mass murder is the answer to the problem.

Investigating the source of Hitler’s anti-semitic ideas, provides an explanation for where these ideas came from and why they took root, but the missing piece for me, being brought up in a so-called “Christian” country, was how many millions of Christians could reconcile a belief in “love thy neighbor as thyself,” with a willingness to murder men. women and children, because of their race.

It is to the Christian Churches that I look first for an explanation, as they were hugely influential at all levels of German society in regards to matters of morality.

Why did they not speak out, as a group, against Hitler’s crimes?

Let’s look at some matters, which I believe were influential to the culture of that time.

In Hannah Arendt’s book, The Origins of Totalitarianism, on page 102, she speaks about the Jesuit statutes which forced each novice to prove that they had no Jewish blood “back to the fourth generation.” The anti-semitic Jesuits, she notes, controlled the Vatican’s international policy from the early 19th century.

But the single most important reason, as to why Germans went along with Hitler, was that the Catholic Church was the first international power to recognize Hitler’s regime with a treaty, a Concordat, ratified September 10th, 1933, only months after he came to power.

It was obvious to all that Germany had been taken over by a raving anti-semite, and a party which in 1930 had attacked and killed 8 Jews in Berlin, and which harassed and abused Jews in streets, shops, cafés, and other public places.

Yet the Vatican was the first major power to give legitimacy to these murderers. From this Concordat, German Catholics and other Christians would have known that murderous anti-semitism was compatible with Christianity, in the opinion of the leaders of the Catholic Church.

This shameful Concordat has never been repudiated, to this day, and still stands as the treaty from which German’s unapologetically wealthy Catholic Church extracts a religious tax, as part of the payroll tax for those who agree that they are Catholic in all Germany.

This same Concordat required that all Catholic clergy pledge an oath of allegiance to the Fuhrer. Hitler ensured that he got the public allegiance of the clergy in exchange for the pieces of silver passing to the Church.

To give you further proof of the total involvement of the Catholic Church with the Nazi regime, consider these facts, taken from The Holocaust Conspiracy, by William R. Perl, page 192-193:


It was glaringly obvious to all that the Catholic Church approved of Hitler’s murderous policies. For German citizens, brought up to obey their leaders and their church, there would have been little option, but to comply.

Laurence O’Bryan, author of the Puzzle series. For more information and to follow our campaign for the truth to be revealed follow:


https://www.facebook.com/laurenceobryanauthor/
Posted by Leo McBride at 00:05