The team over at Mad Robot Comics have hit their Kickstarter total for their first graphic novel collection of their Madhouse series - incorporating the first four issues. Here, we take a look at issues two and three. There's still time to hop on board the Mad Robot Kickstarter - find out more details here. The project will be funded on March 17.

Sometimes, there are sentences you can write as a reviewer that completely lose your readers. I'm about to write one of them. Are you ready? Good.

One of my favourite films of recent years is Sucker Punch. There, I said it. Still with me? Excellent. It's not without flaws, I wouldn't even begin to argue that one - its pastiche of pandering male fantasies is frankly too obviously pandering to male fantasy. But what is remarkable about it is the layering of realities. It is a movie you can sit and watch for nearly two hours and still end up debating who the lead character actually is - and which part of the movie was real.

Madhouse, too, peels back the layers on the onion skin of the lead character's reality. Andy Mountbank, fresh from discovering he is imbued with powers that allow him to combat demons in issue one, is on the lamb, out and free from the asylum and being pursued by two wardens in a bus. Cue a car chase that allows artist Edward Bentley to showcase his talents.

But just as Andy thinks he is getting away, up pops a voice in his head, a vision in his back seat and spiders that itch and skritch at his brain filling him with doubts and questions.

I won't get into spoiler territory here but the second issue deals with that chase and the consequences of its finale - which we delve into further in issue three. The third issue is the real harrowing of the soul for our poor hero, forced to face up to the choices he's made, and make a decision as to which reality he should trust. By the end, we are set up for the final confrontation in issue 4. But this is Andy's world, where we don't even know what is real - so who knows what we can trust as we venture into the final segment. One character, for example, has a sudden change of direction that looks suspiciously too good to be true. 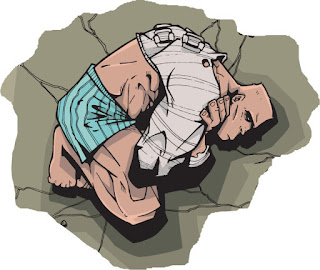 I'm looking forward to that last issue, and seeing where we wind up. This has been a bravura piece of storytelling by the Mad Robot team - and you can see they are learning as they go. The lettering, for example, is much clearer than in issue one, while there is still plenty of room to experiment. One sequence of panels is connected by flowchart arrows that - it has to be said - look rubbish on the pdf version as you flip between pages but should look rather spiffy on the printed page.

Will Andy defeat his antagonist in issue 4? Or will we learn that there is no antagonist and it's still all in Andy's head? That we don't know the answer with any clarity makes this story a true joy - I'll be tuning in for issue 4.