Q&A with Tales From The Universe author Rob Edwards

Rob Edwards is a newcomer to Inklings Press - his story Upgrade To Murder is the first time he has had a piece published in an Inklings anthology, but hopefully not the last! He joins us for a chat about his work and his history as a storyteller. 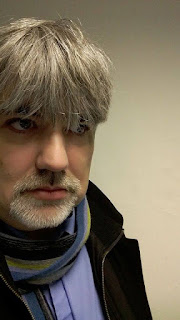 Hi Rob, and welcome to Inklings Press! Is this your first published piece or have you been published before? If the latter, what have you had published previously, and where?

I was first published at age 11.  The  Royal National Institute for the Blind released an anthology called "Stories for a Prince" in honour of the birth of Prince William, and my story, "Dragon Valley", was one of 14 winning entries from schoolchildren across the UK.

I then hit something of a dry spell of about two decades before I had several RPG scenarios published by Wizards of the Coast as part of their convention-based Star Wars campaign, "Living Force". My greatest geek claim to fame... there is a (very short) entry about me on Wookieepedia!

Now, only a single decade later, Tales of the Universe awaits!

At this rate of acceleration, by 2266, all published material will be written by either me or Agatha Christie. No need to check the maths on that.

Wait now, you're on Wookieepedia? We're never sure which is the spelling these days. You have to tell us more about that!

Oh this is my greatest geek pride, I tell anyone who will listen. Essentially, I wrote a few scenarios... I ended up writing seven of them, this was about the time of the prequels so a good while ago now, but yes, my Wookieepedia gives the list!

But it was officially licensed, so in theory someone at Lucasfilm has read something I wrote in the Star Wars universe. Until today that was the second most exciting thing to happen to me.

Your story for the anthology has a real love for good old-fashioned murder mysteries. Are you a fan of those yourself and if so, who's your favourite writer in that regard?

My first love is sci-fi and fantasy, but as a child I devoured the works of Christie and Doyle, all very British murder mystery. Holmes and Poirot, Poirot and Holmes, not sure I can choose between them.

(Fellow Inklings writer Brian S Converse chimes in with a question) I have a question: was this a story that you already had written, or did you write it specifically for this anthology?

Hi Brian, no, this one was for this anthology. Was mulling about it for so long, I almost missed the deadline. most of this story was written on my iPad in an aeroplane travelling between Finland and the UK!

You have a second string to your bow, we understand, with your podcasting. Indeed, you have recorded the story for this anthology on your site. How did you get into podcasting?

Honestly, the stories I write, I've always read out loud, it's how I know they're working or not. And then I started going to a writers' club and read aloud there. At the same time I was really getting in to listening to audio dramas (particularly Big Finish Doctor Who stuff)... and it just... seemed to conflate into An Idea.

So I publish an infrequent podcast called Storycast Rob. You can find it on iTunes and at www.storycastrob.co.uk. If you liked my story in Tales from the Universe, you can hear me read it in the latest episode! Just keep in mind I'm a writer not a voice artist, so, the accents aren't always authentic.

We particularly enjoy your note: "The accents in this podcast are fictitious and any resemblance to any real accents, living or dead, is more by luck than judgement."

I have a lot of fun recording and editing them, but the do take me ages to do, and they are... further between than I'd sometimes like. I have big writing plans for this year, which includes making podcasts more often.

Are you on social media?

I have just recently entered the world of Twitter, and you can follow me (at? on? did I mention I was new to it?) @storycastrob

What are you working on next for readers to look forward to?

If all goes to plan, 2016 will be a big year for my writing. I'm taking a few months off work after Easter to concentrate on getting some of my works in progress into shape. By the end of the year, I'm hoping my novels "So you want to be a space alien superhero?" and "Writ in Blood and Silver" will be in a state that I can release them into the wild!

Oh, and I'll be pitching for inclusion in further anthologies for Inklings Press too!

We'll look forward to it, Rob! Thank you for joining us.

Tales From The Universe is available now on Amazon. You can buy it here: http://mybook.to/TalesUniverse
Posted by Leo McBride at 09:53