FREE STORY: In The Stars We Learned To Soar 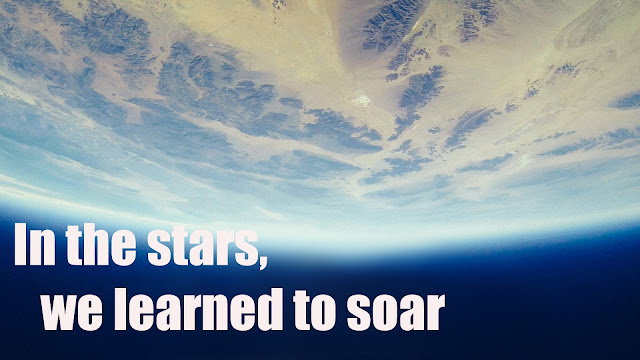 In The Stars We Learned To Soar
By Leo McBride


Dead trees tumbled through the dark, spilling out of the ruptured dome of the bio-vessel, fractures tearing open the trunks where the water had boiled away. Jozsef Razvan nudged Čapek closer, its camera transmitting the damage back to the screens on his Buckyship.
It was almost beautiful, he thought, the slow, elegant spiral seen on his main screen and the two slave screens from the drones. Then a body span past the lens of the second drone, Karel, and Jozsef frowned. The bio-vessel would have had a crew of 30, maybe 40, all gone now, and its precious cargo of plant life exposed to the vacuum of space.
He remembered Aishe drunkenly telling him about plant biology at the last Abiav, how plants could survive longer in a vacuum, that some could be goaded back to life by the right hands. Looking at the damage, he doubted any of this could be revived. Still, if anyone could make something of it, Aishe could. He thumbed the control to mark the location and made a note to forward the information to her later.
The name of the bio-vessel lit up in the lights of Čapek. Verdoyant, and a tricolor. Part of the fleet of the French arm, thought Jozsef. Or it used to be, back when there was a fleet worth talking about in the Sol system. Moving Čapek further along the flank of the other vessel, finally he found it, the hexagonal shape of the airlock. He looked at the asteroid above, Amphitrite, and the timer counting off the 25 minutes of sunlight left before eclipse. He had to do this quickly. Give me time, sea goddess, Jozsef thought, then activated the recall on the drones and fired up the docking sequence.

The airlock was undamaged, but the interior beyond it was a mess of warped girders. At first, Jozsef thought he might be better going back out and dropping through the hole in the biodome but then he spied a path through and edged past, carefully making sure his suit wasn't snagged.
There were black marks along the wall, too. Signs of fire, he mused. No, sharper, straighter lines than a fire. He wondered again whether it was an asteroid collision or something else. He tapped the remote on his wrist and set his Buckyship to scan mode. He had to move.
There were two elements to the bio-vessel, the dome itself with its rich collection of plant life, and the crew areas of the ship. The dome was ruptured but the walls between it and the crew areas had been broken down by whatever had caused that damage too. The port side of the ship was open to space, Jozsef soon found, and the bridge and computer core were open to void, but crucially on the starboard side, several rooms remained intact, including he was delighted to find, part of the ship's seed bank.
He quickly loaded several containers with the sealed trays and loaded them onto a cart. A priceless cargo to recover, he grinned, thinking how Aishe would react to the find. There were some small stems, little more than twigs, and his eyes sparkled, and he added those to the salvage. Leaving them ready by the door to move, Jozsef continued to explore.
The remaining undamaged rooms were crew quarters, but no one was present. He guessed that they were all working to save the ship as it lost its final battle, be it with nature or something else. He wished he'd been able to access the computer core to find the sensor logs, see what had brought the end of the Verdoyant. Looking through the quarters, he found the remnants of life. Mementos, knick-nacks, photographs, scraps of what once was, reminders of what might never be again.
He lingered over one of the photographs, showing what appeared to be the crew of the ship, gathered smiling in the engine room. He counted them. Thirty-three souls. Some laughing, some making rude gestures at the camera, some raising glasses. He wondered how quickly the end had come for them. He wondered if they had time to say goodbye.
He set the picture frame down. Nothing he could do for the gadze crew now, though what they once had could do good things for others. He opened the door to the last room, his eyes alighting on paper, notched with marks of ink... and gasped.

Back aboard his Buckyship, Jozsef finished stacking and securing the seed trays as the computer handled the negotiation away from Amphitrite and its orbiting minor asteroid, Rhode. He kept an eye on proceedings, ready to take over the chair if there was an alert but it was a simple matter of reacting to sensor readings if any fragments got too close, so the automated pilot could handle it. Still, the same could have been said for the Verdoyant. As the asteroid started to recede into the distance on the viewscreen, Jozsef smiled and tapped the satchel that he had brought back from that last room on the shattered ship.
“Thank you, sea goddess,” he murmured to the vanishing asteroid. “Thank you.”

When they came up for air, they found themselves back in her Buckyship, laughing and spinning through the lower gravity. They settled, giggling, against the low-g hammock and talked, and talked. He told her of the bio-vessel and, with a pencil, demonstrated the tree spinning through the vacuum. She mouthed her awe at the sight and insisted he pass along the co-ordinates so she might try and revive some of the plant specimens. She chattered on about things she had heard about certain plant species being able to be cajoled into life with the right treatment. Jozsef couldn't imagine how, but just watching her passion for the subject was enough for him. If she wanted to try, he was going to be the last person in the universe to stop her.
In return, she told him of her own travels, mostly trading around the Five Settlements and garnering news from the Fold Points at Luna and Mars. Earth may be withered and gone but out beyond the solar system, the cultures of humanity continued to reach out their arms, slowly but definitely.
“Will you ever go through the Fold?” she asked. She always did. As ever, he shrugged and said he would be where his people were. Rom with Rom, Gadze with Gadze.
“They say that through the Fold, they need people. We could begin again there. We could start anew.”
“Aishe,” he sighed. “These arms reaching out, when did they ever reach out for us in the past? Why would they reach out to us now? They go through, then hunker down on rocks, grip it like it's the land that matters, the way they did when there was a world, the way we always rejected back then. We always knew there was more to the world than a piece of land under your feet.
“Go through the Fold and you leave everything behind. Are you so sure you're ready to take that step? Family? Our culture, our way of life? You want to be a groundhog once you're on the other side? And what of the things we've left behind, the world that is gone, that they so readily want to leave?”
He interlaced his fingers with hers when he said that, but he could see that look in her eyes again, the one he knew meant she wanted to take the leap. She yearned to see more.
Their reverie was interrupted by Tamas bursting into the Buckyship, his duty shift ended. With much clapping on the back and cries of “come, come”, the two were pulled back into the swirl of the celebrations.
The party finally began to ease as the hour of the Abiav came close. The women and men separated, the women gathering around the bride, and the men seeking out the groom. Each was carried by their respective parties to the cargo bay of the Callico, the largest open space in the connected ships.
There, a silence fell as elder Bartholomeus called the ceremony to order. Wasili beamed with pride, while Talaitha clutched the twigs that Jozsef had retrieved from the Verdoyant.
She presented one of the twigs to Bartholomeus, who took it then snapped it and cast it aside.
“The twig breaks,” he said, “but your pledge must endure.”
Talaitha presented another twig. Bartholomeus snapped that too, saying: “Even the Earth withered and fell, but your pledge must endure.”
The two nodded, then presented one another with gifts, Talaitha providing food, Wasili providing drink, of which each partook, Wasili swigging his cup with a swagger. Then Bartholomeus produced a small knife and each extended their hands. He drew a thin cut along each hand and the two pressed them together.
“The mingling of the blood,” said Bartholomeus. “It was in the water one learned to swim. It was in the stars one learned to soar. It is with one another we learn to be.”
Aishe stepped forward and bound the pair's hands with ribbon, tied three times – signaling fertility, constancy and long life. The two stood close together with their wrists bound as blood stained the white ribbon. Talaitha drew some saucy laughs from the audience with an audacious and obvious wink that broadened Wasili's grin further.
And with that, Bartholomeus leaned close to Wasili and said, “She is sharp, this one, let her be your guide. Let her be your needle, let yourself be her thread. Follow surely wherever she goes.”
He slipped the ribbon open and the two embraced to a raucous roar of approval from the gathered guests, Jozsef shouting loudly among them. The celebrations so far had been as nothing. The feast was only just beginning. Back in the old days, the celebrations were mostly kept until after the event. But gatherings such as this were too few not to make the most of, so the tumult of earlier would carry on for another day at least, louder and more energetic if possible.
Before the parties could swirl away, however, Bartholomeus let out a bellow. “Before we all get too drunk,” he cried. “I need a few moments with members of the Diwano. Let's talk with clearer heads than we'll have tomorrow. The party can go where the drink is. The Diwano shall be here, in five minutes.”
Jozsef nodded. The gathering of elders. It happened every time there was a meeting of the families. He ducked out quickly and returned with his satchel just as the Diwano began. Tem was there, and Tamas, and Emmanaia. Aishe had gone to the party, seeing to her duties in the bridal party. Another dozen remained.

UPDATE: Tales From The Universe is now available on Amazon here - http://mybook.to/TalesUniverse