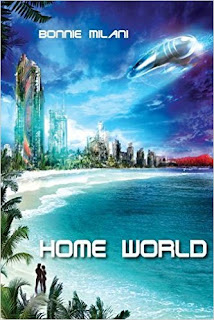 Once upon a time, there was a roleplaying game named Traveller. It offered science fiction in the classic style, with nobility and military veterans tackling adventures alongside ne'er-do-wells and outcasts. It offered a future brim-full of possibility, full of invention, inspired by the likes of Poul Anderson and Harry Harrison.

The opening of Bonnie Milani's Home World propelled me back to those days of playing Traveller. It oozed class and style, showing a world where technology transforms the everyday experience of the future citizens of Earth.

Class systems remain intact in this future - with the central character of Jezekiah being the future heir of the title of Protector of Home World. Earth itself has transformed in many ways, though, to the point where natural humans are the stuff of legend, most people being sorted into different Types from a scattering of cultures.

If the setting tips its hat towards the likes of Anderson, the plot is far more Machiavellian. Jezekiah is caught in the middle of a series of political shell games, as he tries to secure a treaty that will bring peace and stability to Home World. The heart of this deal is a marriage contract between his sister, the whining, selfish Letticia, whose days are spent burrowing into the cyber world of the Sync, and the human hybrid Strongarm, an honourable, lion-like Lupan warrior who, once bonded, bonds for life.

Woven into the tale are other characters - most notably Keiko, the would-be Samurai with an ancestry that binds her to the underworld of Earth, with whom Jezekiah finds himself falling in love.

The action that surrounds the politics can be brutal - this is a tale for adults, with strong language and horrifying actions on the parts of some of the protagonists. Those who find Game of Thrones too much at times should note that similar ground is trodden here. Also, while noting things that may put people off, there are one or two small editing errors to be found, the occasional an instead of a, for example - but really very minor problems only worth mentioning for the most stringent of eyes.

In the midst of all of this, there's some very clever writing going on. In particular, I was taken with the attention to language. The future world has assimilated all manner of dialects, and a pidgin English is spoken at times between those of separate cultures. This can make for awkward reading at times - but in a good way, because while you puzzle out what this form of broken speech or that idiolect involves, you are immersing yourself in this future landscape, the imperfections crystallising the world around you.

Beyond that, Milani also pays attention to non-verbal communication, with various characters having different means of observing the world around them. Keiko has her battle sense that alerts her to threats in her vicinity, Letticia is immersed in the Netmind of Sync with access to the myriad of options that cyberpunk-influenced world provides, the splendidly-named bodyguard Rudyard Kipling Marsden - Kip for short - is able to observe the moods of others around him through his heightened technology, while Jezekiah himself is often noted to be attuning the mood that he broadcasts as being different from that he feels inside. Meanwhile, the feral ancestry of Strongarm equips him with the ability to sniff out what others are feeling. Communication is key in this future world - more crucially, limiting your communication to avoid broadcasting one's real intentions is a matter of life and death in the world of political games that mark out the life - and possible death - of Home World.

It's a cracking read - and while I might not be totally convinced by the authenticity of some of the romantic connections in the book, that's fully believable in a world where politics, including marriage for advancement, are par for the course.

And by the end? I'll be darned if I'm not wanting to pick up some dice and venture back to my years of playing Traveller - and the dreams it sparked of a universe of infinite possibility.