When is a typo not a typo? Amazon's reported plans to tackle spelling errors 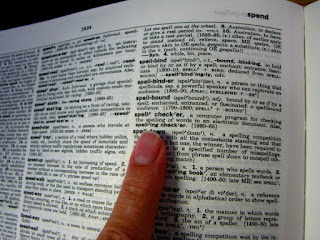 A story started circulating yesterday that - in one respect - is positive, but has provoked unease from a number of authors.
The Good E Reader reported that Amazon would start to include warning messages if a book contained poor spelling or bad formatting.
First of all, a warning would appear on the store detail page - but if Amazon deemed there to be too many errors or that the formatting made it unreadable, then the listing would be removed.
I've got mixed feelings about this. Let's look at the good first. Not so long ago, I picked up an ebook on Amazon that frankly looked like the creator couldn't be bothered. A poor cover that showed little to no effort, and formatting that did nothing to try and help the reader to navigate their way through the book, with chapters that ran on into one another without any break, some awful punctuation and pretty much everything else you could throw in there to bring a one-star review.
So, with an example such as that, perhaps a bit of a warning - or a blocked listing to push its creator into making a bit more effort for the sake of a readers - might be a good thing, right?
Well, that's the positive. But there's also plenty of negative to stir up concerns for authors.
The book I've finally gotten back to on my Kindle at the moment is the splendid Home World by Bonnie Milani (review to appear in a future post). One of the key things that you quickly pick up on is the use of particular dialect to flesh out her setting. A conversation early on is conducted in a form of pidgin English, which makes the reader work to figure out what the discussion is about, but at the same time immerses them in the world of the story, making it more tangible, making you feel the sweaty reality of the setting.
Equally, I might refer to the works of James Kelman, whose books are written in a ferociously unforgiving Glaswegian dialect that don't come with a helpful guide to translator and which is sure to ring every bell in Amazon's spellchecker.
Chatting with others, people were also concerned about use of idiolect too - such as deliberate errors in spelling by characters that didn't know how to spell the word, deliberate slurring of words for a drunken character or contractions in the vernacular, which is a problem sometimes, innit?
All of these examples - and many, many more in a host of works - are very deliberate choices on the part of the author. A recent science fiction story of my own bristled with words highlighted in red because it mixed different languages as it told the tale of a Romany population exploring space. And science fiction and fantasy in particular is littered with exotic spellings for the fantastic worlds they depict.
So will the automated processes of Amazon give leeway for individual expression? That's one concern.
Further to that, the story also said that readers can flag stories with incorrect spellings, which again can be an issue - for example, if a reader in the UK flags a story with US spelling as a mistake when it really isn't, rather just a different convention. And that also opens up the possibility of abuse - fellow writer Ricardo Victoria pointed out that trolls might use it to make writers' lives a pain as they continually have to deal with false corrections submitted by people just trying to make their lives a misery, and I've seen more than one writer fretting about other writers marking their "competitors" books as having mistakes in some bizarre war of one-upmanship.
In the end, it comes down to implementation. Writers will welcome the opportunity to perfect their book - if they are given the chance to assert their authority over the final product and not have to keep chasing after alerts and complaints that may not be valid. So if warnings are provided with the opportunity to over-rule them, that might not be a bad thing. Might. We'll see.
Lastly, one final note on that book I referred to that could have done with a warning... there already was one. We say not to judge a book by its cover, but you can judge the lack of care put into the presentation of a cover, plus there is already the review system where people can happily express their annoyance at poor spelling and formatting.
Some other sources have questioned how likely it is that Amazon will implement what has been suggested in the article - so we wait to see how things will work out in the end. But clearly, concerns are already stirring.

EDIT: Another blog post casting doubt on some of the elements in the first one linked above is here.
Posted by Leo McBride at 12:28