I am delighted to welcome dm gillis as a guest. Here, he presents a free short story, complete with swearing that would make Samuel L Jackson proud. It starts in a coffeehouse, so grab your cup, settle down and enjoy... 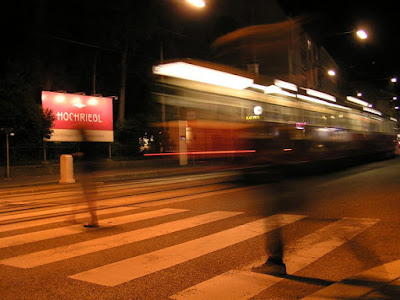 Death is weird. It’s like looking at the living through the bug splat on a windshield.
I swore the moment I heard about it, that I would never participate in The Pyramid Scheme, but Ralph was right, death is boring. So, I’ve caved-in, and I’m about to enroll my first participant. That’s why I’m here in Vegas, standing out front of the MGM.
Oh, hang on. I’ve got to go. Max Philbin just pulled up.

dm gillis is a Vancouver writer who lives vicariously through the dead. Follow him on Twitter here or on his blog.
Posted by Leo McBride at 11:17