Where in the world can I buy Quartet?

When he awoke, it was nearly dawn. He strained to sit up, but fell back again, his lungs bursting into a spasm of coughing which he turned towards the wall to try and muffle. His head was pounding and his skin felt like it was burning. No. He could not afford to be weak yet. He wasn't far enough away yet. They might still find him here. They might...

"Hello," said a voice behind him and the old man froze. 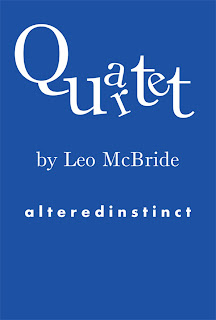 Meet the old man who takes a lead role in A Place To Rest, the opening story of Quartet, a collection of four fantasy-tinged stories from Leo McBride.

That first story sees an old man turned fugitive - and the surprising encounter he makes in his flight, and the perceptions that come into question along the way.

Percy is a tale of modern fantasy, about a homeless man who turns hero, and the realisation that there is far, far more to this man than there appears.

Lastly, The Grandfather Clock tells the story of a boy and his strange connection with the tick, tick, ticking grandfather clock in his family home.

Quartet is available in Amazon markets around the world. Below you can find your local market and a link to Quartet for purchase.

You can follow author Leo McBride on Twitter at @chippychatty, where you can hear about special promotions and other projects.