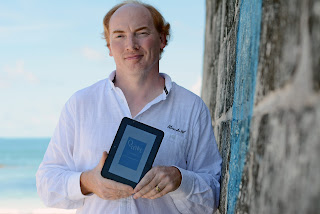 Originally, today's blog post was going to be a review. But a funny thing happened on the way to the keyboard.
The book I was going to review I won't name. You see, recently, during my free weekend promotion for my book Quartet, I did a bit of tweet sharing for other authors whose books were free at the time, and the book I was going to review was one of those I shared and downloaded myself to have a read.
And it wasn't very good. More than that, it wasn't very good for very specific reasons - and the more I found myself reflecting on those reasons, the more I found myself considering which of those reasons applied to my own book.
Let's take it from the top - the book up for review had a plain black cover with the title simply typed and centred in white Times New Roman about 1/4 of the way down the page, with an ellipsis... before adding "and other horrors". Then a couple of returns and the author's name. It did absolutely nothing to catch the eye.
Then, upon reading the book, the stories appeared to have never been edited, lacking impetus, drive, conflict, and any real reason to engage with them. They rambled on from beginning to end in the fashion of never having had a rewrite let alone an editor's pen cross their path.
And lastly, there was no real theme binding things together, no relationship between the stories.
In truth, the presentation, production and writing quality would have meant a one-star review - for a book that had no reviews posted, so I haven't added one to Amazon as yet. It feels harsh to do so. I may share some advice on Twitter, if I get the sense it would be welcomed.
That's when my thoughts turned to the lessons that I could learn for my own book.
Editing eyes have passed over my work, and changes made accordingly before publication, so I'm reasonably confident there, and there have been approving comments from readers, for which I'm thankful.
But in my weekend of giveaways, two things did seem clear to me. Firstly, the cover as it stands needs to go. When I first published Quartet, it was the first time that I'd tried publishing anything to Amazon - it was essentially my test run, my learning curve, making sure I understood the process before repeating it on behalf of other writers. And so the cover was simply what was there from before, when I had it as a test run on building an ebook to begin with. It deserves better, and so a new cover is in the works.
It's also fair to say that while there are connections in my head between the different stories in Quartet, that relationship might be less clear to the reader, and so the new edition (which readers who have paid for it already will get updated automatically) will also include some support material in which I explain why I wrote each story, and what they mean to me.
It will take a little while to put together, but Quartet deserves better than perhaps I gave it in the first instance. And for that, I have an author to thank who did things wrong, and reminded me that I need to put things right.