When everyone else expects you to zig, zag. Confound expectations and you're already one step of the way to getting people's attention. And that's what I was left thinking as I opened the first issue of Madhouse, the new comic book from the team at Mad Robot Comics.

For if you have a new comic line, a new artist and a new world to reveal, the last thing you expect when you open the first page is... darkness. A page of blackness interspersed with dialogue. Confounded, I most certainly was. 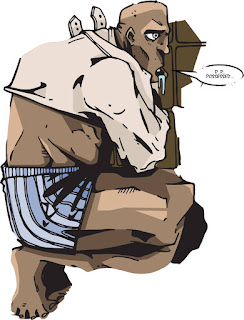 When the artwork comes then, it comes as a glorious technicolour joy. Edward Bentley has a striking talent - his work evoking the jagged in-your-face nature of a Jamie Hewlett or the bold iconography of a Frank Quitely. In chatting with writer Matt Hardy, he noted there was a dabble of Humberto Ramos in there and you can see it in the exaggerated body shapes, particularly of our central character.

That character, Sidney Stratton, is a man trapped in a lunatic asylum, where he swears more is going on underneath the surface, that demons walk the halls, that he has to act to put it right. It's a jumble of madness as you have no certainty about what is real and what is madness. Was he the warden here? Or was that just a fantasy too? And when he confronts the demons, are they real or is he attacking innocents? Matt Hardy leaves lots of open questions here - perhaps a couple too many as you try to get your head around who Sidney is and why you should care about him - but the tone is set just right for the feeling of oppression around him.

There are a couple of criticisms - which you would expect as the team finds its feet and explores the format. The lettering is sometimes too small to be easily read on an electronic viewer, particularly the in-his-head dialogue as Sidney observes the world around him. And the colouring is a little uneven, deliberately so in some cases as the comic ventures into flashback territory showing how Sidney got to where he is now, but it doesn't make for a unified look across the book. And I'd love a little more substance to Sidney himself, who feels a little as if events are playing out through him to begin with rather than acting on events directly. But then, the poor man may indeed be mad - and it's hard to blame him given the creepy corridors, the unnerving nurses and demonic doctors around him.

When he bursts into action, he is a force of nature, unstoppable even as he wrestles with the unknowable. Heaven help the world when he gets out...

You can find out more about Madhouse and its publisher, Mad Robot Comics, at www.madrobotcomics.com. The team is also on Twitter as @madrobotcomics and on Facebook. Full disclosure: I've known Matt Hardy for a while through gaming tournaments, where we would glare and scowl at one another across the table as we tried to destroy one another with our dice.
Posted by Leo McBride at 09:47