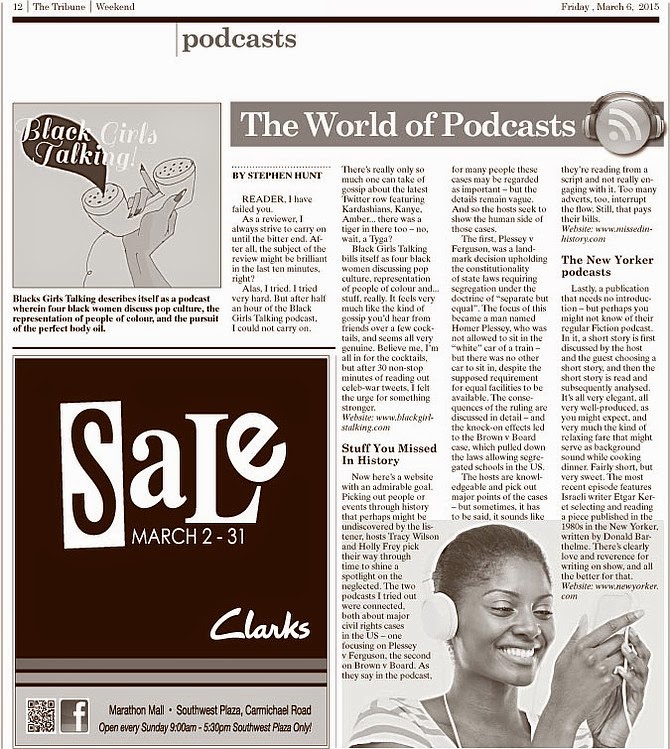 As printed in the Weekend section of The Tribune on March 6. http://www.tribune242.com/photos/galleries/sets/weekend/

READER, I have failed you.
As a reviewer, I always strive to carry on until the bitter end. After all, the subject of the review might be brilliant in the last ten minutes, right?
Alas, I tried. I tried very hard. But after half an hour of the Black Girls Talking podcast, I could not carry on. There's really only so much one can take of gossip about the latest Twitter row featuring Kardashians, Kanye, Amber... there was a tiger in there too – no, wait, a Tyga?
Black Girls Talking bills itself as four black women discussing pop culture, representation of people of colour and... stuff, really. It feels very much like the kind of gossip you'd hear from friends over a few cocktails, and seems all very genuine. Believe me, I'm all in for the cocktails, but after 30 non-stop minutes of reading out celeb-war tweets, I felt the urge for something stronger.

Stuff You Missed In History

Now here's a website with an admirable goal. Picking out people or events through history that perhaps might be undiscovered by the listener, hosts Tracy Wilson and Holly Frey pick their way through time to shine a spotlight on the neglected. The two podcasts I tried out were connected, both about major civil rights cases in the US – one focusing on Plessey v Ferguson, the second on Brown v Board. As they say in the podcast, for many people these cases may be regarded as important – but the details remain vague. And so the hosts seek to show the human side of those cases.
The first, Plessey v Ferguson, was a landmark decision upholding the constitutionality of state laws requiring segregation under the doctrine of “separate but equal”. The focus of this became a man named Homer Plessey, who was not allowed to sit in the “white” car of a train – but there was no other car to sit in, despite the supposed requirement for equal facilities to be available. The consequences of the ruling are discussed in detail – and the knock-on effects led to the Brown v Board case, which pulled down the laws allowing segregated schools in the US.
The hosts are knowledgeable and pick out major points of the cases – but sometimes, it has to be said, it sounds like they're reading from a script and not really engaging with it. Too many adverts, too, interrupt the flow. Still, that pays their bills.

Lastly, a publication that needs no introduction – but perhaps you might not know of their regular Fiction podcast. In it, a short story is first discussed by the host and the guest choosing a short story, and then the short story is read and subsequently analysed. It's all very elegant, all very well-produced, as you might expect, and very much the kind of relaxing fare that might serve as background sound while cooking dinner. Fairly short, but very sweet. The most recent episode features Israeli writer Etgar Keret selecting and reading a piece published in the 1980s in the New Yorker, written by Donald Barthelme. There's clearly love and reverence for writing on show, and all the better for that.