PODCAST REVIEW: After The Walking Dead - plus a little tickle of Star Wars

Republished from The Tribune of April 10 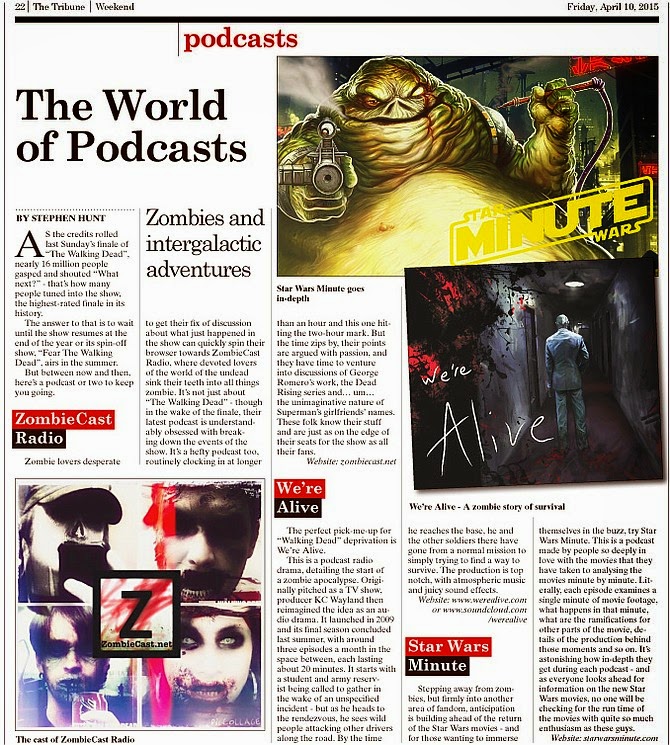 AS the credits rolled on this season's finale of "The Walking Dead", nearly 16 million people gasped and shouted "What's next?". That's how many people tuned into the show, the highest-rated finale in its history.
The answer to that is to wait until the show resumes at the end of the year or its spin-off show, "Fear The Walking Dead", airs in the summer - but between now and then, here's a podcast or two to keep you going.

ZombieCast Radio
Zombie lovers desperate to get their fix of discussion about what just happened in the show can quickly spin their browser towards ZombieCase Radio, where devoted lovers of the world of the undead sink their teeth into all things zombie. It's not just about "The Walking Dead" - though in the wake of the finale, their latest podcast is understandably obsessed with breaking down the events of the show. It's a hefty podcast too, routinely clocking in at longer than an hour and this one hitting the two-hour mark. But the time zips by, their points are argued with passion, and they have time to venture into discussions of George Romero's work, the Dead Rising series and... um... the unimaginative nature of Superman's girlfriend's names. These folk know their stuff and are just as on the edge of their seats for the show as all the fans.

We're Alive
The perfect pick-me-up for "Walking Dead" deprivation is We're Alive.
This is a podcast radio drama, detailing the start of a zombie apocalypse. Originally pitched as a TV show, producer KC WAyland then reimagined the idea as an audio drama. It launched in 2009 and its final season concluded last summer, with around three episodes a month in the space between, each lasting about 20 minutes. It starts with a student and army reservist being called to gather in the wake of an unspecified incident - but as he heads to the rendezvous, he sees wild people attakcing other drivers along the road. By the time he reaches the base, he and the other soldiers there have gone from a normal mission to simply trying to find a way to survive. The production is top notch, with atmospheric music and juicy sound effects.

Star Wars Minute
Stepping away from zombies, but firmly into another area of fandom, anticipation is building ahead of the return of the Star Wars movies - and for those wanting to immerse themselves in the buzz, try Star Wars Minute. This is a podcast made by people so deeply in love with the movies that they have taken to analysing them minute by minute. Literally, each episode examines a single minute of movie footage, what happens in that minute, what are the ramifications for other parts of the movie, details of the production behind those moments and so on. It's astonishing how in-depth they get during each podcast - and as everyone looks ahead for information on the new Star Wars movies, no one will be checking the run time of the movies with quite so much enthuiasm as these guys.

BONUS: Since this column was published, this little movie trailer was released...