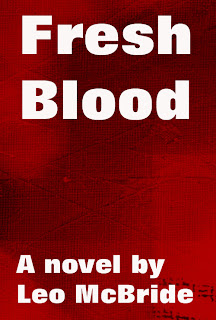 A murderer, leaving a trail of bodies across New York City. A detective, haunted by dreams that show him glimpses of the killings - dreams that cannot be real, but which lead him ever closer to the killer.

Fresh Blood is due for publication later this year as an ebook. For now, it is a work in progress. And while the words and I battle back and forth in the traditional wrestling match that goes on pre-publication, I'm also starting to dabble in working out the best way to present it to you, the readers of this blog, and hopefully in time the readers in a wider audience. To which end, I am creating an audiobook version of the novel to be released for free in a countdown to the ebook's release.

So here, available today, is the first chapter of the novel. Recorded by me, the author. I won't expect the voiceover work to come rolling in, that's for sure, but hopefully it will give you a glimpse of the world of Fresh Blood. It will introduce you to Detective Nathan Miller, and the first of the dreams that are to drive him to doubt his sanity, but to follow his night visions wherever it takes him. Whatever the cost.

You can download the first chapter as an mp3 file here: http://speedy.sh/qJCfe/Fresh-Blood-Chapter-One.mp3

Audio effects by NicStage
For anyone having difficulties with the SpeedyShare site, chapter one is now available on YouTube:
Posted by Leo McBride at 03:44