London riots - and getting the news across

"I have to say, we're almost unable to keep up with this," said BBC newsreader Chris Eakin as the coverage of the London riots wore on late into the night.

It is little surprise. Hackney. Ealing. Chalk Farm. Camden. Notting Hill. The reports kept coming in from new outbreaks of rioting. Journalists on the scene were attacked, people with cameras became targets of rioters who didn't want to be identified.

Altogether, though, one of the main problems suffered by the BBC coverage was that it was a lot of talking heads or voices on a telephone speaking over the same footage, and it was hard to see the breadth of how this was affecting London. No stepping back from the latest interview for a second. No graphics to show where incidents have taken place across the city. It also seemed a seriously undermanned newsroom, with Eakin left to hold the fort on his own throughout. He did as admirably as he could, but the coverage seemed lacking in precision and clarity.

Watching the coverage with Facebook and Twitter feeds running, it seemed easier to get the bigger picture through those messages. In real time, reports appear on a street-by-street basis as people respond to what is happening outside their window.

Of course, these reports tend to be unverified, and sometimes unverifiable. Pictures of looters being circulated with appeals for their identity that will probably prove fruitless as there's no certainty as when that particular picture of that particular man was taken. 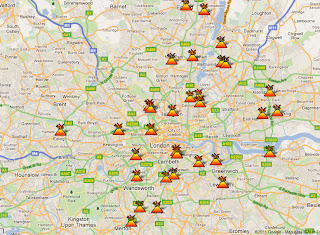 Each marker has a report to go with it, with source cited. Creative - and a good way to draw together a host of reports from such varied locations as the BBC, Sky, and newspaper websites.

Over on Twitvid, the video below was being widely circulated - a rare sight of someone standing up to the looters, though featuring the kind of language that would be much bleeped on the Beeb. Link to video: http://www.twitvid.com/4JTZH

Of the newspaper sites, the Guardian seemed to have the best grip on the coverage. The site ran a host of stories, but the heart of it was the live blog, regularly updated throughout the night and keeping a close eye on social media responses mixed with comments from their own reporters in various London districts. Reading through their coverage gave a good sense of the feeling on the streets.

Gathering all the details of breaking news events across such a wide area is a tough task - and no one outlet could ever give the full picture given its scale. At the heart of each of those outlets are teams of reporters out on the streets, trying to give as accurate a picture as they can in hazardous circumstances. Reporters such as the BBC's Sangita Myska coughing during her report from the smoke pouring out of a nearby burning building. Or Sky's Mark Stone, questioning looters in the video below:

Of course, the hardest part still lies ahead - making sense of it all and figuring out how to stop it happening again. After a night that has seen more than 220 people arrested, that's a big question to find an answer to.
Posted by Stephen Hunt at 16:24