The storytelling of Game of Thrones

Warning: article may contain mild spoilers for Game of Thrones, the first book of A Song of Fire And Ice

Sure, I'd chanced across his work before - a girlfriend was always urging me to read Fevre Dream or Armageddon Rag, and somewhere behind the screen, his work had nudged at me in the Twilight Zone and Beauty and the Beast. But it was the stories of the hapless Jokers and Aces of the Wild Cards universe that truly introduced me to Martin's work.

For those who have not read the series, Wild Cards is a collection of stories by a multitude of different writers, writing in a shared universe where a virus is released over New York. The virus rips through the population, reworking people at the genetic level. Some gain beneficial abilities - the power to fly, the power to control people's minds, the full range of superhero-style abilities. Most become gnarled and twisted, those who drew the Joker, and who would ever be the butt of that joke. Martin held the umbrella over it all, editing the work of a host of great writers, and contributing his own tales, especially about The Great And Powerful Turtle, who uses his psychokinetic ability to flies under the shell of an armoured VW Beetle. It sounds a mad, crazy kind of collection, but despite containing such a disparate range of stories from writers of all kinds of styles, the series held together strongly, creating a parallel history to our own. In the end, the structure was a collection of short stories, but a collection that was unified and moving in the same direction.

Many people will be coming to Martin's writing for the first time now in the wake of the wonderfully successful HBO adaptation of Game of Thrones, the first of his Song of Fire and Ice series, and it is interesting to note some of the parallels between the earlier Wild Cards series and Martin's fantasy epic. 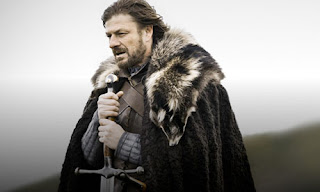 Game of Thrones has a host of characters - so many in fact that one of the hard things at the start of the TV series was keeping track of who was who. From Jon Snow at the Wall in the far north to Daenerys Stormborn in the far distant lands of the Dothraki, and with a host of lords, kings, princesses, knights and commoners in between, the story sweeps across Martin's fantasy land.

But interestingly, in large part, it is a story told through a series of short stories. The chapters of the book are not numbered, or given a separate name. Instead, the chapters (other than the prologue) are identified by the name of the character through whose eyes the events are being related. Eddard Stark, Catelyn Stark, Jon Snow, Arya Stark, Tyrion Lannister, Sansa Stark, Bran Stark, Daenerys Targaryen - eight characters, each with a role to play in the larger story. Separate their stories out, and you essentially have eight short stories ultimately woven together into the greater novel.

For writers, it is interesting to learn from this. Many a writer friend has protested about the way in which their book is progressing, how it falls short in word count by a sizeable margin, and looking at the way Martin handles his host of characters can be a good tutor. Characters that seem unimportant at first to the direction of the novel build up through their own stories to become essential to the heart of the tale. To those writers struggling along, it's a splendid lesson in the art of introducing a strong and engaging series of sub-plots. 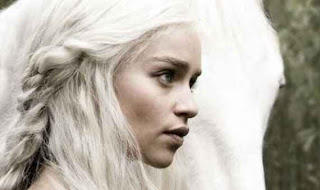 Take, for example, Daenerys. At first, she is a young girl on a distant continent from the main thrust of the action. Her tale could be removed entirely from the book and not affect the majority of the action of the first book. For most of the other characters, she is a distant threat discussed abruptly at the king's council, and that's about it. However, given the chance for her story to be told, her presence grows in the minds of the reader, and the climax of the novel has her character perfectly positioned for the second book. Could her story have been dealt with in that second book? Certainly. But weaving it through the fabric of the first presents a strong and powerful character with a layered personality instead of a sudden, simplistic threat.

Elsewhere, other characters have an arc that is not as powerful as that of Daenerys. Take Bran, for example, or Sansa, who observe more than they act. With each of them, however, you have a sense that there is a destination ahead worth waiting for. Each section is tightly plotted, each character has his or her surrounding cast of friends and enemies, family and history - and many of that surrounding cast comes to an abrupt end, which we feel all the sharper because we have seen their role in people's lives before the swords come out and the blood flows.

Wild Cards had a shared universe structure, and Game of Thrones treads a similar path. Collecting each character's separate short stories effectively creates the shared universe of these individuals, and out of that, the novel is forged.
Posted by Stephen Hunt at 06:58