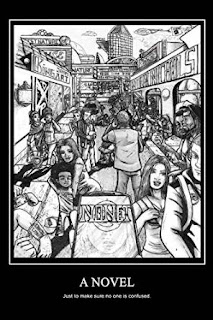 No Net, by Noah Nichols

No Net is a book that simmers with potential.

The book poses a simple question - what would happen if the internet suddenly disappeared?

Presented in 20 Apps - rather than chapters - the book shows the unravelling of a near-future society after the internet suddenly, inexplicably goes missing.

Essentially, this plays out as a series of vignettes showing different groups affected by the blackout.

At first, we are presented with a scene from before the blackout - an incident of brutal domestic violence kickstarted by one partner seeing messages to his wife. Does this hint that we would be better off without the internet communication so pervasive in our lives? Well, the next chapter suggests not, as things quickly go from inconvenient to very, very bad. Some spoilers here for the early part of the book, so look away if you don't want to know them. In the face of the blackout, people in one community gather in one centre to find out what is going on. Gathered around TV sets, they hear the US president announce that the internet is indeed gone and no one knows how or why. Panic sets in, there's a sudden outbreak of violence that escalates before security robots intervene and, in what might be considered a design flaw by most robot designers, kill thousands of people in self-defence. Yes, thousands. In the heart of all this chaos, our ostensible lead characters at this moment in time turn killers themselves with surprisingly little provocation, and get away in part because of some help from a passing rioter who seems to have come to the party prepared with a rocket launcher. After those deaths, the officers investigating it seem to be more focused on flirting with one another and arranging a date than being in any way affected by death in such magnitude. In short, it all goes a bit weird.

Now reading this, you might think the author is going for a surreal, blackly comic tone, but really it doesn't come across that way. Indeed, it's quite brutal and bleak at times, sad and poignant in moments rather than aiming for satire.

As the book progresses, we see more of these vignettes. There's no central character, we just see how
the blackout affects citizens; the current US president; a former president turned inventor who created a gauntlet equipped with taser and other devices to fight off would-be rapists; the man who attempted to attack her in her youth leading to the invention and even a nutcase who seizes the opportunity in the chaos to become a serial killer. That format of presentation isn't necessarily to the detriment of a book - just look at Ray Bradbury's The Martian Chronicles to see a book where a core central premise is played out by a host of different characters.

Sadly, there's not really much exploration of the other aspects of how society would be affected by the sudden absence of the internet. Businesses largely carry on as normal. News teams seem to have no problem with going out to their remote crews even when the data has stopped flowing. There seems to be no major financial crash. Those robot policemen keep on with their overeager policing, seemingly with no need to connect to a central control network. It all focuses in on the people themselves and their reaction to a world where they are disconnected.

What really undercuts the book though is a lack of solid editing. There's too much of a word soup in the dialogue of characters - early on in that scene with all the deaths, the characters are using verbose, wordy dialogue that looks like the author is showing off his vocabulary, even at a time when panic is setting in. That might work for occasional characters, but this is everyone, even one character derided for not being intelligent says things like "Maybe you could just film erotic videos of yourself naked prancing around, touching yourself sensually for all the sleazebags that still like going into a seedy brick-and-mortar store to get their fleshy debauchery fixings." The character voices aren't true to what you'd expect to hear - and they are inconsistent too, with the young girl at the heart of the deaths early on having a completely different voice later on as she talks to her mother. That kind of dialogue, much later in the book, really shines, and there's an honesty and integrity to that which really lets you connect with the characters. The word soup extends to the dialogue tags, too, with the author refusing to settle for "said" as a tag when he can make use of responded, probed, exclaimed, hissed and many more. In addition, sometimes the author veers into all capital letters when someone is shouting - and when someone is shouting really loud? All caps plus bold! Kudos, though, to the shouted line of "SO I CAN'T TROLL ANYMORE?"

There's too much telling rather than showing too - and again this is something that solid editing would have highlighted. One character, for example, we are told is "enraged to the maximum dosage" - an odd way of expressing it for starters, but do we really have to be told that rather than letting us understand his feelings through his words and actions? Just show us what's going on, man.

Loading the story down with such baggage stops it from being able to breathe - and that's a real shame, because there is a great idea here to explore. That idea remains compelling despite the flaws in the execution and I really wanted to know what happened next for a number of the characters.

In the end, the implications of that central idea aren't fully explored, and the execution gets in the way rather than helping the book to shine. The potential idea of the book would earn it a four stars, but each of those negatives knocks a star off for me. Reluctantly, I give it two stars - because I really wanted to see where such an idea would go, and despite that mark, I still want to see what the author will come up with next. But get a decent editor!